Church by the Sea

All 30-minutes concerts are free and are open to the public. Donations in support of the artists and our music program are accepted by visiting our website at churchbythesea.org and by clicking the “donate” button.

Our hope is that people from the community will be able enjoy beautiful music from the comfort of their homes while having lunch. 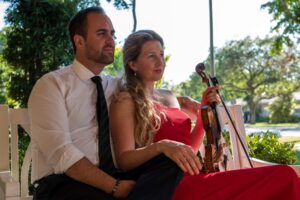 Violinist, Ashley Liberty and Pianist, Daniel Strange have been performing together professionally since their marriage in 2007. As a composer, arranger, and multi-instrumentalist, Daniel creates new and exciting music for the couple to perform in addition to their favorite classical music.

Ashley’s violin playing has taken her to concert halls around the world. Lately, in addition to her concerts with Dan, Ashley performs in the Naples Philharmonic and Miami City Ballet Orchestras and is busy at home with the two younger members of the Liberty-Strange family band (Harrison, 8 and Summer, 4). She recently performed with Shakira in the Super Bowl Half time Show.

Daniel is an Assistant Professor of Contemporary Keyboard and the MADE (Musicianship, Artistry Development and Entrepreneurship) program director at the University of Miami’s Frost School of Music, where he directs the award-winning American Music Ensemble. He is also the director of the award-winning, high school All-Star Jazz Ensemble through the Community Arts Program in Coral Gables. Ashley and Dan have performed with artists such as Broadway stars Norm Lewis and Mandy Gonzalez, Noel Paul Stookey, Arturo Sandoval, Michael Feinstein and Mark O’Connor.

Based in Hattiesburg, MS, the Kontra Duo has been described as “Energetic, sweet, sassy, graceful, & muscular.” Comprised of harpist Kristina Finch and saxophonist Dannel Espinoza, the duo released their first album (self-titled) in 2014. Dedicated to the exploration of both traditional and contemporary music the Kontra Duo works tirelessly to and create spectacular transcriptions that showcase the color spectrum and expressive capabilities of this unique ensemble. Through collaborations with living composers, the duo seeks to expand the existing repertoire for harp and saxophone; an effort that has resulted in stunning new works for the ensemble. The Kontra Duo has performed recitals throughout the continental United States and is known for creating exciting programs of harp and saxophone music that integrate accessible, newly, and recently composed music and new takes on standard repertoires, showcasing the versatility of the pair. 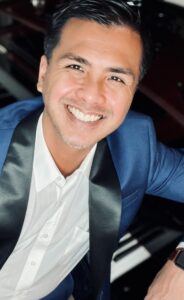 Ross is currently the president and director of the Concordia Arts Group in Seattle-WA and a piano faculty at the Chopin Academy of Music in Issaquah-WA. He is on the advisory board of the Seattle International Piano Festival and Competition where he also serves as outreach coordinator. He was the chairman and artistic director of the Music Without Borders Society in Vancouver-BC from 2013 to 2019.

Ross received his Doctor of Musical Arts degree from the University of British Columbia, where he was a recipient of the Mildred Johnson scholarship award, and his Masters and Bachelors of Music degrees from the Conservatory of Music at Lynn University. He studied with Sara Davis Buechner, Corey Hamm, Kenneth Broadway, Ralph Markham, Roberta Rust, Emilio Del Rosario, Reynaldo Reyes, Mauricia Borromeo, Ruby Pilante-Salvosa, Abelardo Galang II, and Jose Artemio Panganiban.

5-String Swing’s unique Jazz Violin driven sound will sweep you onto your feet with a mix of upbeat Jazz, Swing, and American standards!

Led by Jazz Violinist Steffen Zeichner, with Greg Diamond on Guitar and Benjamin Whitman on Upright Bass, the 5 String Swing Trio specializes in performing lively Swing standards from the 20’s, 30’s, and 40’s along with repertoire from the Gypsy Jazz tradition and classic jazz from the Great American Songbook.

There are no events to show.